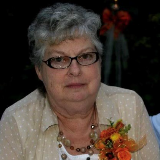 Kathlyn L. “Kitty” Ford, 73, of Stewartsville, MO passed away peacefully, surrounded by her family on November 10, 2021.

She was born on February 22, 1948, to Harold Finis and Saramae (Utter) Brinton in St. Joseph, MO. Kitty grew up in rural Dearborn and attended North Platte School. The family then moved to rural Gower where Kitty graduated from Gower High School in 1966.

On March 23, 1973, she was united in marriage to Mike Ford. After their marriage they lived in the Kansas City Metro area and in 1982 they moved to Gower where they made their home.

Kitty worked in banking for many years. She enjoyed making crafts with Mike, baking and gardening.

She is survived by her husband Mike Ford; daughters Kristen Buie and husband Cameron; and Michelle White and husband Michael; sisters Jane Jackson and Mary Kay Brinton; several nieces, nephews, cousins, other relatives and many friends.