In Remembrance of Maureen O'Neill 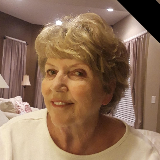 She was born on May 28, 1946 to John and Helen (Lawson) Lowell in Hamilton, Scotland. Maureen grew up in Hamilton where she graduated high school.

On October 25, 1969 she was united in marriage to Jim O’Neill. After their marriage they lived in Larkhall, Scotland and Hamilton, Scotland. In 1981 they moved to the United States. Jim and Maureen lived in Kansas City, MO, Keller, TX and settled in Trimble, MO.

She was a member of the Catholic faith. Maureen loved spending time with her husband, her two daughters, and her seven grandchildren.

Maureen was preceded her in death her parents and her sisters, Eileen Greig and Belinda Lynch.

Mass of Christian Burial: 11:00 a.m. Friday, October 15th at Good Shepherd Catholic Church, Smithville, MO with visitation one hour prior to the service.