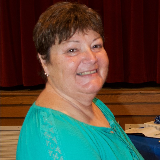 Patti Lynn (Wedermyer) Gray was born to a farming family in WaKeeney, Kansas, on October 21, 1952.

From the beginning of her life, Patti was joyful and musical, a born rule-follower and lover of order, but she also had a playful rebelliousness. She was the oldest of her siblings and cousins, who adored her, and she was the ringleader of a lot of fun.

Patti’s young adulthood was full of adventures. She worked as a bartender and though she was petite, she challenged customers to games of pool that she always won and occasionally did things her parents only found out about later.

Patti started her education in the same one-room country school her mother, Kathryn, had attended, then went to high school in town, then to college. After Patti graduated from Fort Hays State University with a bachelor’s degree, she taught in Oakley, Kansas where she met Curtis Gray, and they fell in love. They married September 8, 1979, and in May of 1981, their first and only child, Traci, was born and they shared many precious moments together as a young family.

Patti was determined, after the end of her marriage, to build a life she wanted for her and her daughter.  She enrolled in graduate school at Fort Hays, and kept working. Her village surrounded her to help take care of Traci. Patti earned her master’s degree in education in 1987, moved herself and Traci to Sabetha, and embarked on a career as a teacher of gifted children in all grades. She thrived in this role, tailoring projects to each child’s needs. Patti worked in Sabetha and surrounding schools for 22 years, retiring in2009, and she kept in touch with many of her students long after they finished school.

Patti and Traci enjoyed a home filled with music, be it on the radio, piano, guitar, or just their two voices harmonizing together. Patti loved scrapbooking, quilting, reading, and spending time in one of her many side hustles she used to stay active and support her family.

After retirement, Patti moved to Prairie Village, Kansas, to be near her grandchildren. Her empathy and appreciation for children made her an excellent GiGi. She was wonderfully intentional with each of her grandchildren and the many other special children in her life. While in Kansas City, she sang with the Kansas City Women’s Chorus, and joined the New Song Church. There, Patti found her people: a group of women who put up with no nonsense and who loved music and fun as much as she did.

As the years went by, Patti lived out her deep love for others. She used her freedom in retirement to care for numerous family members and loved ones in their times of need. Even through her illness, Patti made time for fun, family holidays, and special events. Patti was always thinking of others, even in her hardest moments. She continued creating smiles through the very end.

Patti had her way of how things should go, always.

Patti Wedermyer Gray died on the morning of September 7, 2021. She is survived by her mother, Kathryn Wedermyer, of Goodland, Kansas; brother, Doug Wedermyer and wife, Sandy, of WaKeeney, Kansas; brother, David Wedermyer and wife, Laura, of Olathe, Kansas; daughter, Traci Gray Ketter, and husband, Jason, and their children, Simon, Miles, Amelia, and Ella, of Parkville, Missouri; and numerous beloved cousins, who were all her best friends. Patti was preceded in death by her sister, Vicki Wedermyer, and by her father, James Wedermyer.

The Ketters will host local friends and family at their home in Parkville on Friday from 5 to 7 p.m.

There will be a graveside service in WaKeeney on Saturday at 11:30 a.m. at the WaKeeney City Cemetery, followed by a lunch at the Presbyterian Church in WaKeeney